An important step and sometimes overlooked part of the vineyard cycle is dormant or winter pruning. This theoretically can be done as soon as the vine enters a stage of dormancy. Dormancy is a phase in a grapevine growth cycle which occurs after the grapevine drops it’s leaves and ends in late winter to early spring. Dormancy phase helps vines to tolerate cold winter temperatures and has an important influence on grapevine flowering and vegetative growth in springtime. During the dormant phase, vines need to be exposed to enough hours of chill temperature for the bud break and normal spring growth to occur during the next season.

Grapevines at Keswick Vineyards are pruned in one of two ways, either cane or cordon, also referred to as spur.

In cane pruning, a permanent trunk is established, and each year two to four one-year-old canes are selected from the head of the vine, where the trunk and trellis wire intersect. These canes are tied or clipped to the wires out to opposite sides of the trunk, up to two per side, extending halfway to the adjacent plants. Each cane will carry approximately 8 to 10 buds. All other canes will be removed, save one or two renewal spurs four to six inches below the fruiting wire carrying one or two buds. These will provide fruiting canes for the following season.

In a cordon system, permanent arms, or cordons, are trained to extend from either side of the trunk extending from plant to plant. These will remain as the base for the one-year-old spurs that arise from various points along the cordon. These spurs will be pruned to approximately two to three buds long, evenly along the cordon, with all excess growth and unevenly placed spurs then removed. 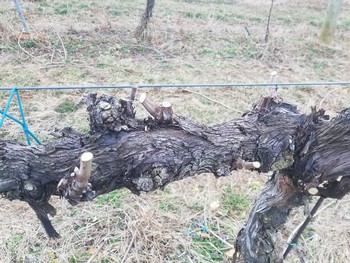 In years past we have always spur pruned our vines but have noticed a high incidence of phomopsis [dead arm] on our canes. Phomopsis is a disease caused by a deep-seated wood rot of the arms or trunk.  Early in the growing season, the disease can delay the growth of the plant and cause leaves to turn yellow and curl. Small, brown spots on the shoots and leaf veins are very common first symptoms of this disease. Soil moisture and temperature can impact the severity of symptoms, leading to a systemic infection in warm, wet conditions. As the name of this disease suggests, it also causes one or more arms of the grapevine to die, often leading to death of the entire vine. As such, we have been laying one-year old canes down and cutting out the established cordon. Early signs hint that this is a helpful tool in minimizing the incidence of phomopsis; which leads to a healthier cane and better vine balance.  Although more labor intensive, I foresee us adopting more cane pruning in the coming years.

In an ideal world I would prune as late as possible, but with almost 70 acres of vines to prune we must start in December to be able to finish before bud break; which usually occurs around the first or second week of April. Our approach is to prune oldest to youngest and leave our best blocks for last [usually our Cab Franc and Cab Sauv]. The amount of buds we leave is based on the variety as well the weight of the pruning material we remove.  Our intention is to create a uniform and balanced vine, too many buds could lead to over cropping and poor fruit quality and too few buds could create a dense canopy which in turn could lead to higher disease pressure.

With only 6 more weeks to go before the onset of Spring, we are frantically trying to get the remaining vines pruned. Canes still need to be tied down to the wire, soils need to be limed and then hopefully mother nature plays her part and blesses us with a mild Spring and warmer temperatures. Never a dull moment on a farm, and that is just how we like it.