It’s a well-known notion that most little girls grow up fantasizing about their wedding day. During the fantasizing there are several questions that run through their minds---what dress will I wear? What castle will I get married at? What prince charming will I marry?

Our bride, Andra, didn’t have any of those thoughts running through her head. She never was the type to day dream about her wedding day, but rather she spent her time riding horses on a farm. Though for as little day dreaming she did as a child she knew for certain one thing would 100% be a part of her wedding. Roses!

Red roses were her one non-negotiable when it came to Andra and Colt’s wedding on Sunday, October 16th. They wanted them everywhere. Throughout the planning process it became very apparent that having them at their ceremony was one of the single most important details of their wedding. The bride wanted a rose petal aisle…and boy did she get one!

They chose to get married underneath of Keswick Vineyard’s beautifully aged Oak tree. This ceremony location is perfect for intimate groups and brings a very garden like feel to any wedding. The setting of the tree was perfect for Andra and Colt and helped to beautifully showcase their rose petal aisle.

Along with horses, animals in general are a huge part of the couple’s life. They have a few horses and a lot of dogs (five to be specific). Originally, the plan was to have all five dogs walk down the aisle with each of her bridesmaids. After a little thought they decided that just one was enough, and Andra walked down the aisle with both her father and her boxer, Duke!

To capture these moments we had photographer Rob Garland on site. To set the tone of the night we had his brother, John Garland DJ’ing the party! We loved having the Garland brothers working together at Keswick Vineyards. It turns out the two have been family friends of Andra’s while growing up so it was only natural to have them be a part of her wedding day. It was made even more of a family affair by having the Garland’s parents also in attendance that day.

But what’s a party without great food? HotCakes outdid themselves with one of their signature fall treats. Their mini pumpkin muffin ham biscuits were a huge crowd pleaser during cocktail hour and made guests anxious and eager to hit the buffet line later. The night continued on and towards the end, seasonal pies were served with hot coffee and the newlyweds and their guests left happy and well fed!

Congratulations to Andra and Colt! 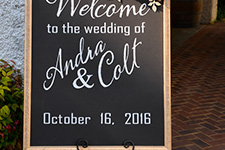 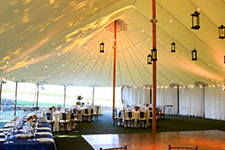 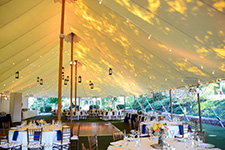 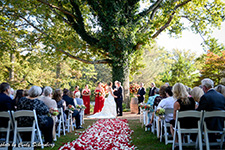 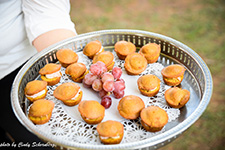 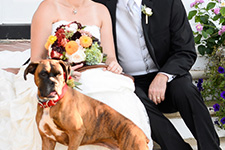 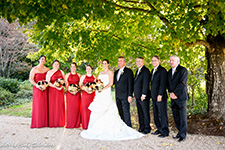 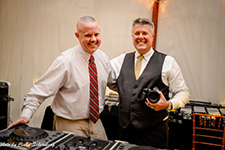 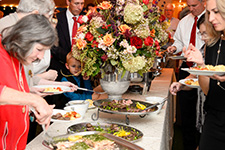